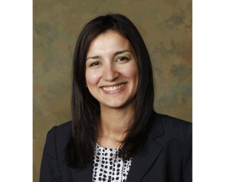 Yvonne Campbell, a member of the Lycoming Law Association, and its Executive Committee, died unexpectedly on August 25, 2019.  She was remembered during an en banc session of the Lycoming County Court of Common Pleas on December 12, 2019.

She enjoyed walks at the local state park with her beloved husband, Donnie and their children, Dahlia and Broderick.

Surviving are her husband, children, and mother; father and step mother, Ellen Pletcher-Quillen; and her dog, Coco-Bean.

A memorial service will be 11 a.m. Saturday, August 31, at Trinity Episcopal Church, 844 West Fourth Street, Williamsport, with Rev. Kenneth E. Wagner-Pizza officiating. A reception will follow in the church hall.

In lieu of flowers, contributions may be made to a charity of one’s choice.

In 2018 in a voice mail to Yvonne, Broderick summed up the truth about his mother when he said: “Mummy, I love you. You are the best Mummy in the world!.....”

Arrangements are being handled by Spitler Funeral Home, Montoursville.

The Honorable Nancy L. Butts, President Judge of the Court of Common Pleas of Lycoming County, 29th Judicial District, by Order dated September 16, 2019, appointed the undersigned Committee to draft Resolutions memorializing the life of Yvonne Helen Stuart Messeih Campbell, Esquire and to submit the same to this Honorable Court at a Special Resolution Memorial Service scheduled for December 12, 2019 at 4:00 pm.

The undersigned Committee submits the following Resolutions for this Honorable Court’s consideration:

NOW THEREFORE, be it resolved, that we, the undersigned, joined by the Bar of Lycoming County, do recognize the passing of Yvonne Helen Stuart Messeih Campbell, Esquire and recommend adopting the following resolutions.

BE IT RESOLVED, that in the passing Yvonne Helen Stuart Messeih Campbell, Esquire there has been a loss to the Bar of Lycoming County of an outstanding member who represented the best principles of the legal profession; a loss to the community of an active and unselfish citizen; a loss to her family of a loving wife, mother and child; and a loss to her friends of a talented and always interesting companion.

BE IT FURTHER RESOLVED, that a copy of these Resolutions be spread upon the records of this Court and that copies of the same be sent to her widower, children, and parents.

BE IT FINALLY RESOLVED, that this Court and its Bar hereby extend to her widower, to her children and to her parents a deep and heartfelt expression of sympathy.