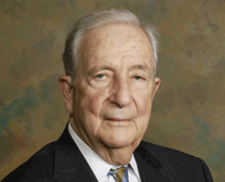 Henry P. Perciballi a 60 year member of the Lycoming Law Association, died on December 12, 2020. He was remembered during a special session of court on August 2, 2021.

Henry P. Perciballi passed away peacefully at his home, Upland Road, Williamsport, on December 12, from complications from Covid-19.

He was born in Williamsport on November 20, 1927, to the parents of Nicola and Michela (Mercaldo) Perciballi, who preceded him in death.

He attended Williamsport High School and was a stand-out basketball, baseball and football player, and was recognized for being part of the undefeated football team of his graduating class. Henry graduated from the University of Pittsburgh with a degree in pharmacy and served in the United States Army-Korean Conflict-State Side. He went on to pursue his law degree at the University of Richmond, TC Williams School of Law.

He married Eleanor Stearns Perciballi, June 5, 1951 and together they celebrated 69 years of marriage.

He has one living sibiling, Mary Perciballi Grieco, his older sister residing in Williamsport, two nephews, Anthony and John and a niece, Nancy P. Pfeiffer.

Henry was a lifelong member of Mater Dolorosa Catholic Church which has closed and attended St. Boniface Catholic Church. He started his law practice with the Fisher, Rice, Greevy law firm, prior to starting his own practice in the ’70s. In the mid-’80s he formed the Perciballi and Williams Law Office in which he actively practiced until this day with his partner Scott T. Williams. He was a member of the American Bar Association, Pennsylvania Bar Association and the Lycoming County Bar Association. In his early career, he served as the City of Williamsport Solicitor, the Williamsport Municipal Airport Authority Solicitor and the Williamsport Municipal Authority solicitor.

Henry was a member of Masonic Lodge 755-Williamsport, the Knight Templer and the Williamsport Consistory.

There will be no visitation and no floral tributes. A Mass of Christian Burial with COVID restrictions in place, will be celebrated by Fr. William Corcoran, St. Boniface Church, 326 Washington Blvd., Wednesday, December 16 at 11:30 a.m. A private committal service at Wildwood Cemetery will be held at the convenience of the family.

All arrangements have been entrusted to the Crouse Funeral Home & Cremation Services, Williamsport. Please visit www.crousefuneralhome.com for online condolences and tributes.

Transcript of the special session of court.

The Honorable Judge Nancy L. Butts, President Judge of the Court of Common Pleas of Lycoming County, 29th Judicial District, by Order dated February 19, 2021, appointed the undersigned Committee to draft Resolutions memorializing the life of Henry P. Perciballi, Esquire and to submit the same to this Honorable Court at a session of Court that is scheduled for Monday, August 2, 2021.

NOW, THEREFORE, be it resolved, that we, the undersigned joined by the Bar of Lycoming County, do recognize the passing of Henry P. Perciballi, Esquire and recommend adopting the following resolutions.

BE IT RESOLVED, that in the passing of Henry P. Perciballi there has been a loss to the Bar of Lycoming County of an outstanding member who represented the best principals of the legal profession, a loss to the community of a valued participant, a loss to his family of a devoted husband and uncle, and a loss to his friends and acquaintances of a dear friend.

BE IT FINALLY RESOLVED, that this Court and its Bar hereby extend to his widow and family a deep and heartfelt expression of sympathy.