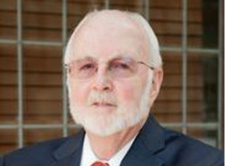 Richard J. "Dick" Callahan, 71, of Montoursville, passed away unexpectedly at home on Sept. 1, 2020.  He was remembered by members of the Association during a special session of court held May 4, 2021.

He received his JD from Villanova University School of Law, was an honors graduate of Penn State University and a graduate of the former St. Joseph High School.

Dick served in the Army National Guard, was a member of the Nittany Lion Club, the Penn State Founders Club, and the Williamsport Country Club. He was an avid golfer, enjoyed everything Penn State and was a lifelong Philadelphia sports fan.

He was in private practice for over 40 years, co-founded two law firms and was a prominent trial attorney as a member of the Lycoming County Bar Association.

He was predeceased by his parents, and his daughter, Shannon K. Cowden.

The family will receive friends at St. Boniface Church, 326 Washington Blvd., Williamsport on Tuesday, Sept. 8, from 9:15 to 10:45 a.m., in keeping with CDC guidelines a mask will be required.

A Mass of Christian Burial will be celebrated at the church, 11 a.m. Sept. 8, with Msgr. Stephen D. McGough officiating, followed by burial at Wildwood Cemetery.

TO THE HONORABLE JUDGES OF THE ABOVE NAMED COURT:

The honorable Judge Nancy L. Butts, President Judge of the Court of Common Pleas of Lycoming County, 29th Judicial District, by Order dated February 19, 2021, appointed the undersigned Committee to draft Resolutions memorializing the life of Richard J. Callahan, Esquire and to submit same to this Honorable Court at a session of Court scheduled May 4, 2021.  The report and Resolutions of this Committee will now be submitted to the Court as follows:

BE IT RESOLVED that in the passing of Richard J. Callahan, there has been a loss to the Bar of Lycoming County of an able and conscientious member who upheld and exemplified the highest traditions of the legal profession, a loss to the community of a valued participant, a loss to his family of a devoted, kind and loving husband, father, and grandfather, and a loss to his friends and acquaintances of a sincere and caring man.

BE IT FURTHER RESOLVED that this Court and this Bar do hereby extend to Dick’s wife, son, grandchildren, siblings, nieces and nephews a deep and heartfelt expression of sympathy.

BE IT FURTHER RESOLVED that this Resolution be spread at length upon the Minutes of the Court of Common Pleas of Lycoming County and that copies of the same be sent to Dick’s wife, son and grandchildren.