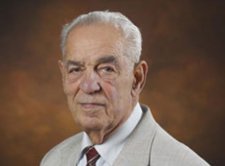 James F. Cendoma, a 63 year member of the Lycoming Law Association, died on February 15, 2021. He was remembered at a special session of court that took place on July 6, 2021.

He was born in Williamsport on Jan. 28, 1927, a son of Michael and Antoinette (Miele) Cendoma.

James was a graduate of Williamsport High School; he then joined the U.S. Navy in 1943. He served in the South Pacific aboard the USS Catalpa, he had many stories about the biggest conflict in history, he was very proud of his service to his country.

Upon his return from the conflict, he attended Dickinson Seminary, now Lycoming College and went on to graduate with honors from the Washington School of Law at American University in Washington D.C in 1953. He has been an attorney in Lycoming County for 53 years and a proud member of the Lycoming County Bar Association since 1957. James also served on the PA Horse Racing Commission under Governor Schapp.

In addition to parents his wife, the former Brenda Prettyleaf and siblings, Emanuel, Matthew Cendoma and Theresa Lomison all preceded him in death.

A Mass of Christian Burial will be celebrated, 10 a.m. Monday, Feb. 22, 2021 at St. Joseph the Worker Parish, 702 W. 4th St., Williamsport with his pastor, Rev. Brian Van Fossen officiating, burial will follow at Wildwood Cemetery. Following CDC guidelines, a mask and social distancing will be required.

In lieu of flowers, the family respectfully suggests memorial contributions in James’ name may be made to; St. Joseph the Worker Parish, 711 W. Edwin St., Williamsport, PA 17701.

On or about April 6, 2021, the Honorable Nancy L. Butts, President Judge of the 29th Judicial District of the Commonwealth of Pennsylvania, appointed the undersigned Committee to prepare a report and resolutions memorializing the life and legal accomplishments of James F. Cendoma, for submission to the Court when completed. Accordingly, your Committee respectfully submits the following report and resolutions:

NOW THEREFORE BE IT RESOLVED, That we, the undersigned Committee approved by this Court, joined in by the Lycoming County Bar Association and Lycoming County bar members, do hereby recognize the passing of James F. Cendoma, Esquire and in his death we remember his many contributions to his country, the citizens of this county and others, his family and this Bar.

RESOLVED FURTHER, that these Resolutions be spread at length, upon the Minutes of Your Honorable Court and be published in the Lycoming Reporter.

RESOLVED FINALLY, THAT THIS Court and Committee and the Lycoming Cunty bar extend to his family our deep and heartfelt expressions of sympathy.