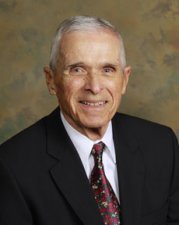 Thomas Max Hall, a 57 year member of the Lycoming Law Association, died on April 28, 2016. He was honored in a memorial service conducted by the Lycoming County Court on May 25, 2016.

IN RE: APPOINTMENT OF A COMMITTEE TO DRAFT RESOLUTIONS IN THE DEATH OF T. MAX HALL

The Committee appointed by your Honorable Court to prepare Resolutions concerning the death of T. Max Hall, Esquire, reports as follows:

1.    T. Max Hall was born in South Williamsport, Pennsylvania, on October 10, 1934.  He died on Thursday, April 28, 2016.  Max Hall was the son of the Rev. T. Max Hall and the Rev. Helen Bechdel Hall.  Three children were born of this marriage.  His sister Carol Brumbaugh lives in upstate New York.  Max was predeceased by his brother, Raymond Hall.

2.   T. Max Hall graduated from Shamokin Area High School in 1952; from Lycoming College in 1956; from the Dickinson School of Law in 1959; and he was then admitted to practice before the Lycoming County Bar and the Supreme Court of Pennsylvania.

3.    He began his law practice with McNerney Page in 1960.  In 1962 he became a Partner, at which time the firm changed its name to McNerney, Page, Vanderlin & Hall.  For the last several years, when Max returned from Florida in late April or early May, he would come into the firm almost on a daily basis until his return to Florida in November.

4.    Max Hall is survived by his wife, Betty Burns Hall, his son T. Max Hall, III and his stepsons, Eric Waldman, James Waldman and Chris Waldman.  He is survived by his grandchildren, Tara, C. Max, T. Michael, Jr., and Madelyn.  He was preceded in death by his son, T. Michael Hall (son of Rita Hall).

6.    His law practice covered a wide range, but he was well known for his divorce and criminal law practices.  He was a zealous advocate for all of his clients.  He developed a business acumen that helped to provide stellar legal and practical advice for all his clients.  His effective and respectful representation of his clients allowed him to maintain good relationships with members of the Bar.

7.    Max served on the Board of Directors of the Williamsport National Bank and was one of the founders of Data Papers, Inc., located in Muncy, Pennsylvania.

8.    He served many charities over the years.  He was active with the Lycoming United Way and also assisted many area residents through the Literacy Project.  He was always quite discreet when he provided assistance to so many people.

9.    Max was an avid farmer for many years in Wolf Township outside of Hughesville, Pennsylvania.  That love of farming highlighted his work ethic.  After many long hours of the day practicing law and attending to board responsibilities, he loved working on the farm with his boys, Max and Michael.

10.   He was a longtime member of Williamsport Country Club and Williamsport Tennis Club.  His exercise regimen included many miles of walking with Betty and his friends.  This helped him keep his weight down and explained his stamina in tennis, which included playing as late as February 19, 2016.  His participation in these endeavors contributed to his remarkable vitality and fitness.  His love for walking and playing tennis was shared by his wife, Betty, only to be outmatched by their feelings for each other.

11.   With T. Max Hall’s death, his family has lost a devoted and loving husband, father and grandfather; his law firm family has lost an invaluable mentor and a kind and considerate colleague; his clients have lost an able and ardent advocate; the Court has lost a worthy and trusted officer; and his community has lost an outstanding citizen.

NOW THEREFORE, BE IT RESOLVED, that we, the undersigned, joined by the Lycoming County Bar, do recognize the passing of T. Max Hall, Esquire, and recommend adopting the following resolutions.

BE IT RESOLVED, that in the passing of T. Max Hall there has been a loss to the Bar of Lycoming County of an outstanding member who represented and stood for the highest principles of the legal profession; a loss to the community of a contributing, valued and unselfish leader; a loss to his family of a loving husband, father and grandfather; and a loss to his friends and acquaintances of a loyal, true and gentlemanly companion.

BE IT FURTHER RESOLVED,that a copy of these Resolutions be spread upon the records of this court and that copies of the same be sent to his widow and children.

BE IT FURTHER RESOLVED,that this Court and its Bar hereby extend to his widow, his children, and his grandchildren a deep and heartfelt expression of sympathy.

AND NOW, this 25th day of May, 2016, in consideration of the Resolutions presented by the Committee appointed to draft Resolutions in the death of T. Max Hall, Esquire, the said Resolutions are adopted, and it is hereby ORDERED and DECREED that the Resolutions herewith submitted and attached be adopted as an official expression of the Lycoming County Bar Association and this Court; and that the same be spread upon the records of the Court; and that copies of this Resolution be delivered to the widow and children of T. Max Hall, Esquire; and it is further ORDERED and DIRECTED that said Resolutions be entered at large and upon the record of the Court, and that they be printed in the Lycoming Reporter.