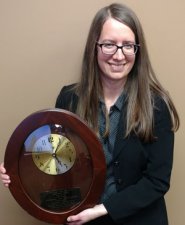 With cold and snow as a backdrop, the Lycoming Law Association annual meeting took place as expected on January 8. Although the weather probably affected attendance, the room was almost full by the conclusion of the meeting.

President Elect Jen Heverly presided in the absence of President Ryan Tira. The LLA's now past president was trapped in Chile, where he was vacationing, due to a number of natural disasters.

The primary responsibility of the members, at the meeting, was to elect a new slate of officers. Jen Heverly was elected president, Christian Frey became president elect and Don Martino will serve as treasurer. Returning at large members of the Executive Committee include Corey Mowrey, Yvonne Campbell and Elizabeth White. Jessica Harlow will fill the open position on the Committee. Angela Lovecchio will continue to serve as secretary.

A budget was passed. The budget projects a $22,024 deficit due to a number of one-time expenses related to the upgrades to the Website and costs associated with the 150th anniversary celebration. The fund balance is sufficient to cover the shortfall.

Committee reports were reviewed by the attending committee chairs. All of the reports may be viewed online.

The Lycoming Law Association Foundation meeting followed the Association meeting. President Tom Waffenschmidt reviewed the financials, which showed that the LLAF assets increased over $46,000 to $349,717 in 2017. Several grants were awarded in 2017.

Longtime board member Eugene Yaw retired from the board at the end of the year. Brian Bluth was elected as his replacement.

The annual banquet, which is honoring two retiring judges and two 50-year members will take place on January 16, a departure from the tradition of following the annual meeting.