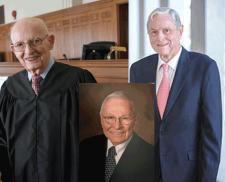 Lycoming County practitioners who have appeared in federal court, particularly in the Middle District of Pennsylvania, will have been saddened by the recent loss of four stalwarts of the bench.

Most recently U.S. District Court Senior Judge Edwin M. Kosik died on June 13, 2019, at the age of 94. Although Judge Kosik generally presided in Scranton, he would also hear cases in Williamsport and was assigned to cases handled by Williamsport attorneys. Judge Kosik was nominated by President Reagan to the U.S. District Court for the Middle District of Pennsylvania on May 14, 1986, and was confirmed by the U.S. Senate on June 13, 1986. He served until his retirement in 2017

On May 19, 2019, Senior Judge William W. Caldwell II died. Judge Caldwell primarily heard cases in Harrisburg, although, as with other judges in the Middle District, he would occasionally appear in Williamsport. On February 19, 1982, President Ronald Reagan nominated Judge Caldwell to a seat on the United States District Court for the Middle District of Pennsylvania. He was confirmed by the United States Senate on March 18, 1982. Judge Caldwell assumed senior status in May 1994, and continued to hear cases until his retirement in February 2018. He was 93 years old at the time of his death.

Senior U.S. District Judge Richard P. Conaboy died November 9, 2018 at the age of 93. Born June 12, 1925, in the Minooka section of Scranton, Richard Conaboy began his legal career in 1951, specializing in labor law. He was appointed judge in Lackawanna County Court in 1962, and subsequently was elected to the position. He held that position until 1979, when he was appointed to the U.S. District Court for the Middle District of Pennsylvania. He became a senior judge In 1992 and continued to work until the date of his death.

Just last August, the Middle District bench lost its longest serving member, William J. Nealon, who died at age 96. On December 13, 1962 Nealon received a recess appointment from President John F. Kennedy to a seat on the U.S District Court for the Middle District of Pennsylvania.. He was formally nominated on January 15, 1963, and confirmed by the United States Senate on March 15, 1963. He served as Chief Judge from 1976 to 1989, assuming senior status on January 1, 1989. He served until his death on August 30, 2018, in Scranton. He was one of the longest-serving federal judges in history, with over 26 years of active service and nearly 56 years of total service.

Each of these judges served extended terms on the Court and were well known to local Federal practitioners. Each was respected as a highly competent and scholarly judge. Each was known as a gentleman on the bench. Each will be missed.