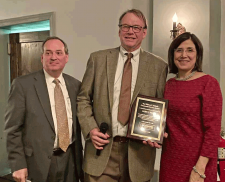 The William E. Nichols Community Service Award was awarded to Gary Weber at the 2020 LLA Annual Banquet to recognize his outstanding community service and for exemplifying the positive role that attorneys play in our community beyond the practice of law. The award was established in 2012, with its first recipiant being Bill Nichols, in recognition of the breadth of Nichols’ sustained commitment to volunteer community service. 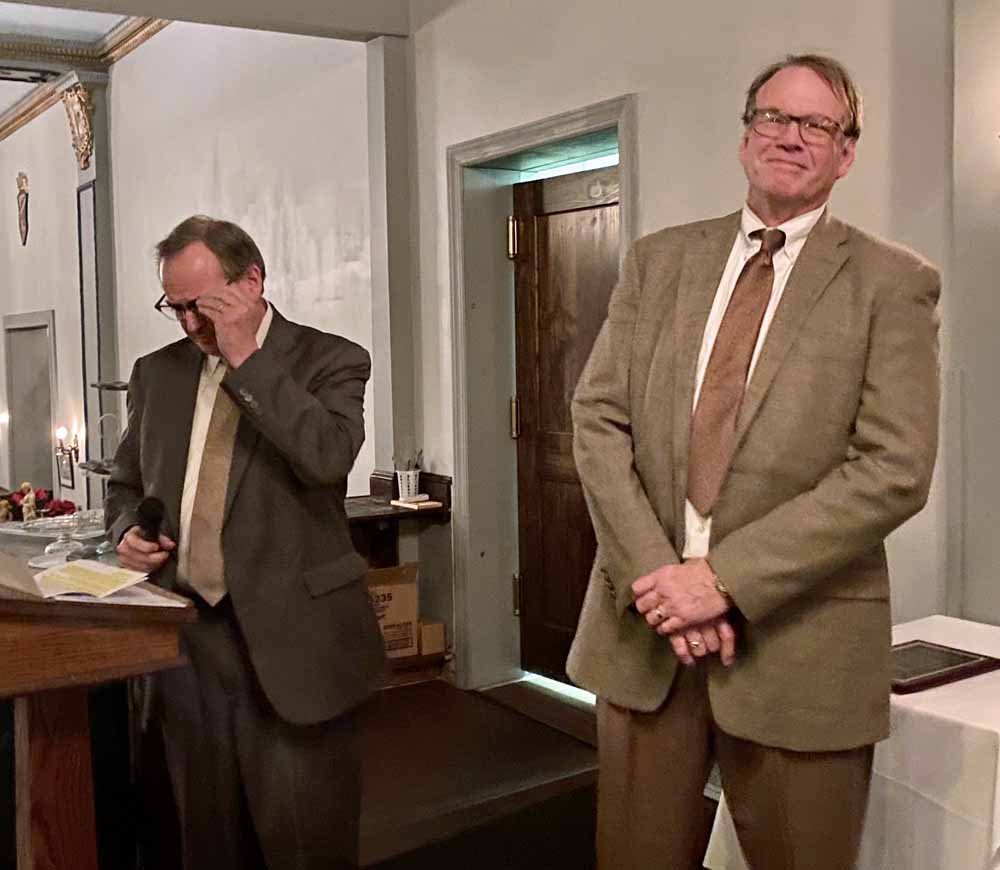 Gary was introduced by his former partner, and friend, Sean Roman, with the following comments:

It is with great pleasure that I stand before you to introduce this year’s recipient of the William E. Nichols Award for Public Service.
This award was created to honor a member of our bar for their community service and who foster the positive roles of attorneys in the community beyond the practice of law.

I am in some respects uniquely qualified to present this year’s award.

As many of you know, I started my legal career at McCormick Law Firm where I had the great pleasure of being a partner of Bill Nichols. There I observed the hours of work Bill selflessly put into the Community. This award is very appropriately named after Bill and his efforts.

But I also had the fortune of being a partner of another individual whose name this award could also be named after. Certainly, this individual is more than a worthy recipient of this award. The individual I speak of is Gary Weber.

I am going to name some of Gary’s contributions, but this is by no means a complete list. We would not have enough time tonight to do so. Gary was a Williamsport Area School Board Director 1991-1999. He served as Local Tax Commission Chair in 1999 and 2006. He is very active in the Boy Scouts of America, Troop 38, and was a Committee Member – 2008 through 2018 . Also created and maintains the Troop 38 website.

He is an active member of St. Mark’s Lutheran Church and is a Past President of the Church Council and currently serves on the personnel, finance and archive committees and is a lector and Communion Assistant. He also created the St. Mark’s website in 2004 and has continuously maintained the site since then. On July 4 he gives away Hot Dogs and Popcorn and participated in the Family Promise fundraising Iron Chef Competition.

I would be remiss if I didn’t mention Gary’s contribution to the Law Association: Gary served on the LLA executive committee from 1996 through 2004 and was President in 2003. Instead of moving off the executive committee, Gary has stayed on the Committee as a non-voting member to this day. He has been the chairman of the LLA customs and rules committee since 1992. He was instrumental in rewriting the Association’s bylaws in 2000 and developed the Association’s website in 2000 and has maintained it since then.

He is the editor of the Lycoming Reporter and spends many hours creating and editing its contents. Gary has created a pictorial history of the Law Association and many of you know the familiar sight of Gary and his camera at Association functions of which he attends almost every one.

As Michele Frey commented to me, “there has not been, and there probably never will be, any one member that has volunteered so much time and effort to the organization.”

Even from the limited snapshot I have provided, it is clear Gary’s commitment and contributions to the success of the Lycoming Law Association and the Community of Lycoming County evidence his worthiness of this award and should serve as an inspiration to us all.

Please join me in congratulating Gary Weber as this year’s recipient of the William E Nichols Public Service Award.

Gary expressed his surprise for the honor and noted that public service was a way of life for his family. He hoped his service could inspire others to do the same.

With the award comes the obligation of the award winner to designate a charity of his choice to receive a donation of $1000 from the Association. The selection of the benefitting charity will be announced later in January.