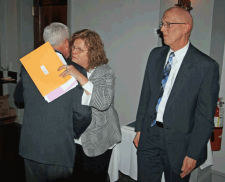 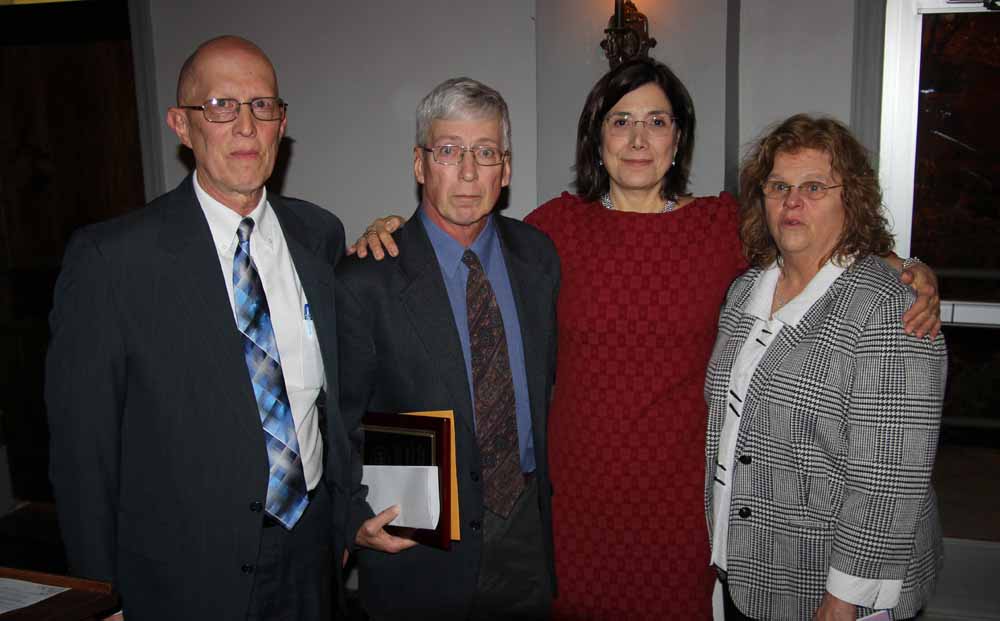 Every year the Lycoming Law Association recognizes one of its members for an extraordinary level of volunteer work that demonstrates outstanding achievement and commitment to equal justice for the poor. As Danna Rich-Collins said in presenting the award this year, the recognition of Kristine Waltz was "bitter sweet." Her sudden death in December was shocking and left the Association without a very productive member.

Danna's remarks during the presentation of the Lycoming Law Association’s Honorable Thomas Wood Jr. Equal Access to Justice Award were most compelling:

As a non-attorney I have enormous respect for the tenets of the legal profession. Despite the unflattering jokes, I believe it to be one of the helping professions. In the job applications we see at NPLS applicants often say they went to law school because they “want to help people.”

It is a profession with a long standing commitment to public service and pro bono representation, 6.1 of the Rules of professional responsibility. 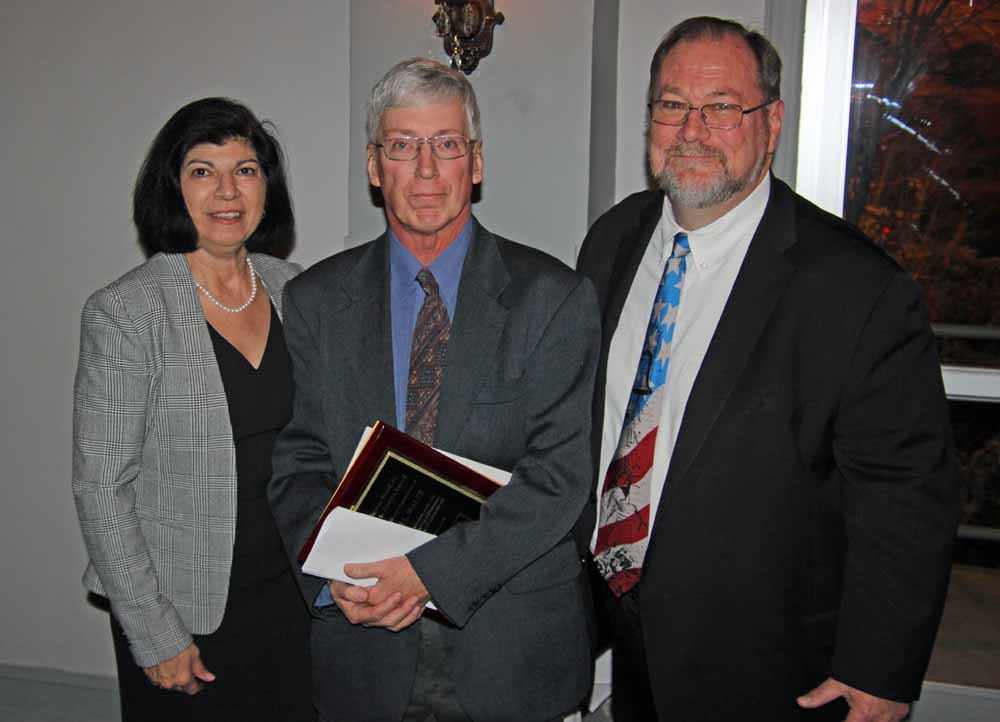 The PA Supreme court has reiterated and emphasized this requirement with a call to participate in legal service sponsored pro bono efforts that went out to all attorneys, the new CLE initiative, and the Emeritus attorneys program.

While I never directly asked this year’s recipient of the Thomas Wood Award why she went to law school, it was obvious she practiced her profession as someone whose vocation was to help people.

It is a bitter sweet honor tonight to present this award. Sweet in that it recognizes an aspect of the recipient’s career and life in which she excelled, was a credit to her profession and a mentor and inspiration to not only others in the profession but the community at large. She exhibited a willingness, actually a desire to help those less fortunate, those who would not have had access to the steps of the courthouse if it were not for her and others like her. It is not just the legal services eligible community she wanted to help but it is that aspect of her pro bono commitment that we honor with this award.

There is no set of criteria for the selection process in terms of years of volunteerism, number of referrals taken or hours of representation delivered. The committee chairman when asked how a recipient is chosen responded in words similar to Justice Stewart when questioned about identifying pornography, “We know it when we see it.”

We have all seen and recognized this year’s recipient's “extraordinary volunteer work that demonstrates an outstanding achievement and commitment to Equal Justice for the poor.”

She took the Law Association’s mandate to do pro bono work with Legal Services as just that, a mandate. She certainly didn’t limit her pro bono to that program but again that is what we are honoring with this award. She was involved in many other public service endeavors which have been and will be mentioned tonight. With all the work she did beyond her client work she never suggested that she should not fully participate in the Legal Services program.

Since she began practice at Candor Youngman she participated and earned the Fair Share Award yearly. She was involved in a variety of ways. She took cases outside her comfort zone as well as cases with in her practice area. She attended trainings and kept abreast of developments in the areas not regularly practiced so as not to limit her participation.

Several years back she contacted me and said that Judge Butts wanted to do something similar with POA, advanced directives and Guardianships as was done with PFA’s. She started the initiative and has participated yearly in taking referrals of that nature. More often than not she took Guardianships as opposed to Document prep. Many of those cases ended up in significant litigation. She also took it upon herself, greatly appreciated I might add, to keep SLS/NPLS posted on any developments in Guardianship practice for our own benefit and to pass on to the volunteer attorneys.

In addition she took Mortgage foreclosures and other out of the ordinary civil cases.

I would like to mention an incident that took place this December. We were overwhelmed one could say with referrals for PFA representation, the cases needing a lawyer were in the teens and we were fast approaching the holidays. I sent out an email plea for help and started making calls,--- begging. I called Dinges Dinges and Waltz and thought I had asked for Christina, as it was a referral in her area of expertise. Someone got on the phone (whom I believed to be Christina) and said “Hi Danna what do you need help with?" I told her it was a PFA and we had no one available, she said sure let me check for conflicts. I should have had a clue when she came back and asked if I had a second to go over any procedure changes that may be in place since she hadn’t done PFAs in a while. We went over some statue changes and she said she was good to go. The next day our office received a call stating that Christina Dinges was questioning the referral we had sent her since she (Christina) hadn’t talked to me nor agreed to take the case. It turned out it was a conflict after all but hadn’t been picked up because the client had been the opposing party but had had a different last name. Apparently, I hadn’t talked to Christina after all but to tonight’s recipient (who by the way had a guardianship litigation going on at the same time and in reflection sounded not at all like Christina.) When I called her to apologize she laughed and then ended up taking another POA referral. I found out later she did show up at hearing just to be sure that the client had gotten representation and wasn’t alone.

It was always a pleasure to call her for a referral, she rarely passed and if she did it was due to her heading out the next day for vacation or something similar and she made sure we knew to call her again.

We have heard from attorneys that knowing their Client was helped means more to them than anything else, especially coming from the client him or herself. Some of her client report forms are as follows: “My new lawyer, did more for me in a short amount of time than my other lawyer did, (sic). She was informational, and explained things –thoroughly--, treated me respectfully, returned my phone calls, kept me informed. I was very happy with her services. She helped me reach my goal (sic), which was to save her home.” Another report: “she made sure my boys were both safe—She was wonderful!.” And yet another: “She was able to help my son in every way that matters.”

The bitter is that tonight’s recipient can’t be with us to hear how much she was appreciated and what a difference she made. Sometimes family members don’t realize what an impact their loved one had on people and the community through her job. I am sure tonight’s recipient’s family had a good idea from all her different projects but we are glad her husband is here tonight to hear firsthand about her contributions to the lives of the many referrals, specifically the poor, that she touched and improved over these thirty plus years.

As I am sure you all know--- tonight’s recipient of the Thomas Wood award is Kristine Waltz. 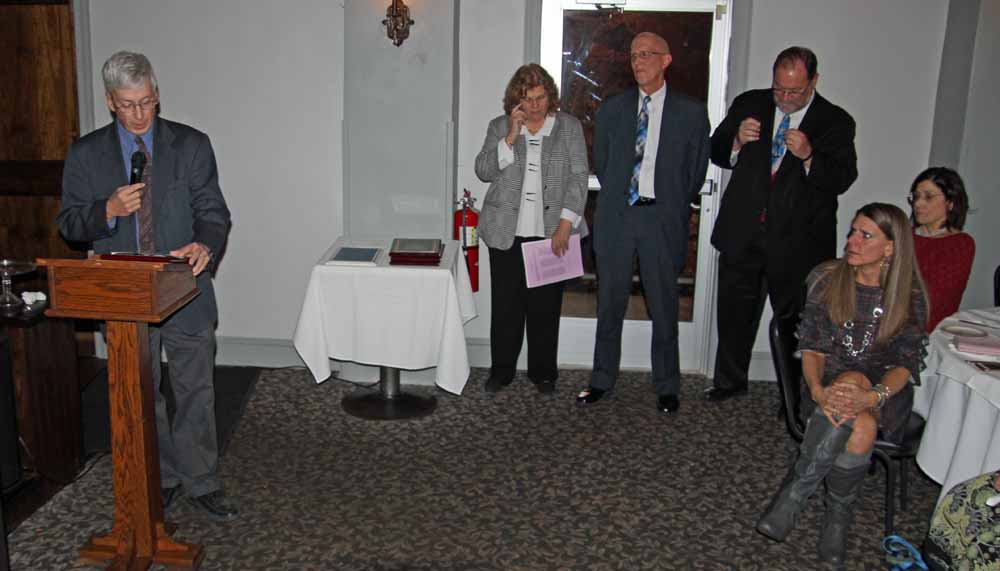