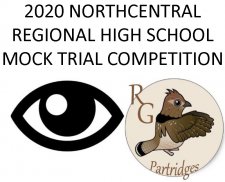 The Mock Trial case involved a claim by  by Addison Babbage, a student at Ruffed Grouse High School, a private school in Wisawe, Pennsylvania. Teagan Eckert, the school principal, was tough, fierce, mean, and she controlled every aspect of Ruffed Grouse High. To stay out of trouble, to survive, you had to stay low or succeed. Addison chose to succeed at chess. Ultimately, the competitive culture fostered by Principal Eckert was channeled through social media, where students tormented their fellow classmates, with cyberbullying. The negative forces that existed at Ruffed Grouse would eventually ensnare Addison. When Addison’s family began construction on a piece of property that was important to the local community known affectionately as “The Eye”, that underground network of negativity turned its attention on Addison.

From whispers in the hallway to fake Facebook accounts, Addison was the subject of constant attacks by other students hiding behind their computer screens. Addison testified that those constant attacks were too much to handle, and he snapped and destroyed Ruffed Grouse’s state-of-the-art chess lab. Addison’s education was interrupted. College scholarships were lost. Even chess, Addison’s refuge, was tainted forever. Addison claims that Ruffed Grouse High’s negligence destroyed a once-promising life.

State College represented the plaintiff Babbage and St. Marys defended the High School. Members of the Lycoming County bar as well as local paralegals served as jurors for the trial.

State College now heads to the statewide championship in Harrisburg, which takes place in late March.