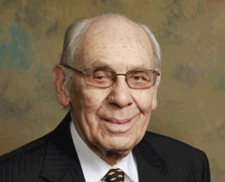 Charles Alfred Szybist, 92, of 1316 Walnut St, passed away on Wednesday, Feb. 3, 2021 after contracting COVID-19. He spent his last days in the Valley View Nursing Center and died with his family at his side.

He was born in Williamsport on Oct. 13, 1928, the elder of two children of Mary Victoria Krezmer Szybist and Stanley Joseph Szybist. Growing up in Newberry, he worked during high school at the Home Dairy, became an Eagle Scout, and graduated from Williamsport High School in 1946. He attended the University of Pennsylvania with the support of a State Senate scholarship awarded by Senator John Snowden, graduating in 1950 with a degree in chemistry, then enrolled at the Temple University School of Law. After receiving his law degree in 1952, he enlisted in the United States Air Force and received an Honorable Discharge with the rank of Second Lieutenant in 1953.

Szybist returned to Williamsport and took his first attorney position with the firm of Bidelspacher and Bidelspacher. His early cases included the court-appointed representation of George "Junior" McCoy, who was charged with (and subsequently convicted of) the murder of alleged communist William Walter Remington at the Lewisburg Penitentiary. After several years with the Bidelspacher firm, he established his own law practice, first working in the Penn Tower in downtown Williamsport and then relocating to 423 Mulberry Street. He practiced law in Williamsport for 63 years, working in many areas and eventually specializing in bankruptcy law and serving as a Chapter 7 bankruptcy trustee.

Szybist was devoted to Williamsport and its civic life. He was an active member of the Holy Rosary and St. Joseph the Worker Catholic communities and served, at various times, as Executive Director of the Williamsport Parking Authority, Bowman Field Commissioner, and Assistant City Solicitor for the City of Williamsport. He was a member of the Ross Club, the Polish Club, the Knights of Columbus, the Williamsport Jaycees (Junior Chamber of Commerce), and the Young Men's Republican Club, among other civic organizations.

In 1969 Szybist married Carla Gerber and they became the devoted parents of five children. In the 1970s and 80s he attended countless ball games, concerts, plays, and performances, always putting his children first, and then putting them all through college.

He was an avid swimmer and reader and loved learning about history. He stayed closely connected with his children through phone calls and visits, and on weekends regularly wrote them letters.

He was preceded in death by his wife, Carla Szybist, his parents, and his sister, Rita Mae Szybist Reichard.

A Funeral Mass will be scheduled at a future date by the family. In lieu of flowers, donations may be made in Charles' name to North Penn Legal Services (https://www.northpennlegal.org/) & Lycoming County Family Promise (https://www.familypromiselycoming.org/).