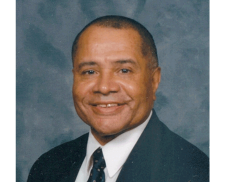 Henry W. Mitchell, a former member of the Lycoming Law Association, died on April 24, 2021. A memorial session of the Court of Common Pleas of Lycoming County took place on August 30, 2021.

On July 15, 1978, Hank married the love of his life, Rebekah J. (Ward), who survives and they celebrated 44 years of marriage together last year.

Hank was a graduate of Williamsport High School Class of 1964. After high school he went on and attended Lycoming County College and then attended the University of Toledo where he earned his legal degree. Hank was the assistant district attorney for Lycoming County for several years and then went on to have his own law practice, Henry W. Mitchell, Esq., retiring in 2014.

He was a member of Revival Tabernacle Church, Watsontown in which he was the head elder for many years. Hank was proud to be a member of the Kappa Delta Rho fraternity. He enjoyed singing and music but he loved football and basketball.

A viewing for Hank will be held from 2 to 4 p.m. Sunday, May 2, at Revival Tabernacle Church, 960 Susquehanna Trail, Watsontown, followed by the funeral at 4 p.m. with his pastor James Bond officiating.

Watch the memorial session of the Lycoming County Court of Common Pleas, August 30, 2021.

The Honorable Judge Nancy L. Butts, President Judge of the Court of Common Pleas of Lycoming County, 29th Judicial District, by Order dated May 28, 2021, appointed the undersigned Committee to draft Resolutions memorializing the Life of Henry W. Mitchell, Esquire and to submit same to this Honorable Court at a session of Court scheduled August 30, 2021. The Report and Resolutions of this Committee will now be submitted to the Court as follows:

AND NOW, THEREFORE, BE IT RESOLVED that as a result of the passing of Henry W. Mitchell, the Bar of Lycoming County has lost a member who exemplified the traditions that the legal profession should emulate; his pursuit of fairness, equity, and inclusivity will be greatly missed.

BE IT FURTHER RESOLVED that we, the undersigned, joined by the Lycoming County Bar, do recognize and mourn the passing of Henry W. Mitchell, Esquire.

BE IT FURTHER RESOLVED that these resolutions be spread upon the Minutes of the Court of Common Pleas of Lycoming County and be published in the Lycoming Reporter.

FINALLY, BE IT RESOLVED that this Court and Committee and the entirety ofthe Lycoming County Bar extend to his family our deepest and heartfelt expressions of sympathy.