Judge Brown Reinstated to Bench - Will Serve in Lycoming County 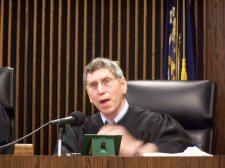 His reinstatement is due to the retirement of Lycoming County Common Pleas Judge Marc Lovecchio, effective Nov. 2, 2021.

Judge Brown was elected as Common Pleas judge with a full 10-year term in 1989 and again in 1999. He became President Judge in 2004 upon the retirement of Judge Clinton W. Smith. At the end of his term in January 2010, Judge Brown became a senior judge.

Senior judges are retired judges assigned to cases, as needed, to ease court backlogs or take over cases where sitting judges have a conflict of interest. They are assigned at the discretion of the Supreme Court to perform judicial services on a limited basis.