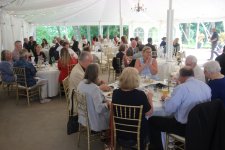 Ordinarily a January event, the 2022 Lycoming Law Association June annual banquet was a bit unusual. But with COVID-19 still impacting activities, some modification in regular schedules had to be expected.

A combined picnic and annual banquet took place at the Bush Estate in Muncy on June 2. The event included all of the awards and camaraderie of the banquet, but in an outdoor venue, in very nice weather.

The main attraction was to honor three 50-year members of the Association. Each was feted by another member of the bar, and received the acclamation of the gathered members and guests.

The first honoree was Pete Campana. He was introduced by his sister Angela Lovecchio, who also read a letter from brother-in-law and former judge Marc Lovecchio. Then Gary Weber outlined the career of his long-time partner Ed Mitchell. Both Pete and Ed continue in active practice in Lycoming County. Finally, Cliff Rieders reviewed his long-time relationship with Jack Humphrey, who is still an active member, although retired from practice. Jack and Ed both served as past presidents of the Association.

President Corey Mowrey presented each of the honorees with a plaque commemorating their 50-year membership, and congratulated them for their achievement.

The 2021 LLA Public Service Awards were presented by John Pietrovito and Jen Heverly. A $500 donation will be made in the name of the award winners to Canine Companions, an organization that trains and provides service dogs so folks in need can live with greater independence.

Nicole Ippolito was awarded the William E. Nichols Public Service Award, with remarks being offered by Judge Biichle. She will have the opportunity to select the recipient of a $1000 grant by the LLA in her honor.

Finally, Corey Mowrey introduced the winner of the 2022 Public Service Award. This award is given to someone in the community who has had a significant impact in the community related to the legal profession. This year’s honoree was Sandy Spencer, for her work with Susquehanna Valley CASA.

The 2022 banquet was sponsored by Woodlands Bank, Harris Investigations and FindLaw. Thanks to our sponsors for their support of Lycoming Law Association events.