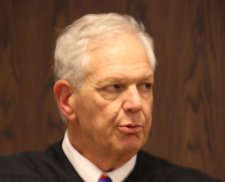 Judge William P. Carlucci has announced that he will be a candidate for the Lycoming County Court of Common Pleas in the May 2023 primary election.

Carlucci is a former member of the Williamsport law firm of Elion, Grieco, Carlucci and Shipman, P.C., practicing for over 30 years in commercial and real estate litigation, contract negotiation and drafting and commercial collections.