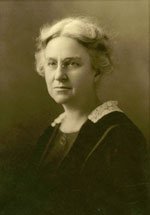 January 10, 2016 - By Mary Sieminski (Reprinted from the Williamsport Sun-Gazette, with permission)

Louise Larzelere (Mrs. Newton C.) Chatham and Rebecca Johnson (Mrs. Charles) Lose addressed the Oct. 1911 Lycoming County Fair in Hughesville on feminist political issues. Chatham, who was the first female candidate for the Williamsport School Board, spoke on "Parent-Teacher Associations." Lose's topic was "What the Farmer's Wife Should Know About Suffrage."

Although Chatham lost her bid for a seat on the school board, both of these women remained active in the women's suffrage movement. Chatham served as chair of both the city and the county women's suffrage committee. After the 19th amendment passed in 1920, she became a founding member of the new League of Women Voters. A quarter of a century later, Chatham became the first woman lawyer in Lycoming County.

Louise Larzelere was born in Doylestown, on Feb. 12, 1872, the daughter of Henry B. and Josephine (James) Larzelere. Chatham had an older brother, Linford, and a younger sister, Claudine. Her father was a mechanical engineer. The family moved to Muncy, and then to Williamsport in 1890, where he held several positions relating to the lumber industry. She graduated from Muncy High School at the top of her class in 1888.

"From her early youth it was the desire of Mrs. Chatham to study law but she was unable to take up that profession after her graduation from high school," according to Col. Thomas Lloyd in his "History of Lycoming County, Pennsylvania (1926)." Her first profession was musician - a career that lasted for 35 years. She became the organist for the Muncy Presbyterian Church just after high school, and once the family settled in Williamsport, she directed the boys' choirs at both Christ Episcopal Church and St. Paul's Lutheran Church. 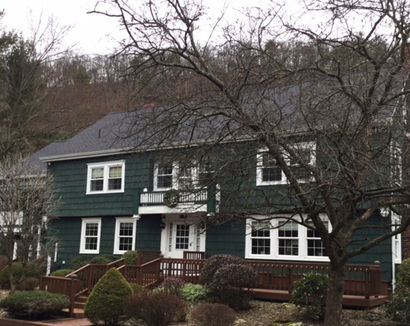 On June 24, 1897, 25-year-old Louise married Newton C. Chatham. The Gazette and Bulletin reported: "The nuptials of Miss Louise Mann Larzelere and Newton Carothers Chatham were celebrated in Christ Episcopal church at high noon yesterday, in the presence of a large and fashionable audience. The vested choir preceded the bridal party up the aisle singing the wedding march from Lohengrin ... The choir sang unusually sweetly, for the bride was their director ... The bride ... wore a gown of white silk with duchess lace and a train veil ... The ceremony was performed by the Rev. Edward Henry Eckel ... An elaborate wedding Breakfast was immediately served at the home of the bride's parents, 225 Maynard street, and Mr. and Mrs. Chatham left for an extended tour of the Great Lakes. They will reside at 931 Vine street."

Newton was the son of Walter and Jennie (Carothers) Chatham, originally from Lock Haven. Newton held a variety of positions, including for a period of time being a co-owner of Otto, Chatham, and Dean, Booksellers, of 13 W. Third Street. The store, which continues today as Otto Bookstore, sold books, stationery, wallpaper and window shades. Louise and Newton Chatham had two children: Clyde, born in 1900, and Newton, born in 1915.

In addition to being a musician, Louise was active in women's organizations in Williamsport, especially groups devoted to education, civic affairs, and women's issues. She was the organizer and first president of the local chapter of the Home and School League, an organization of persons interested in the education of children and the community. She was a member of the Delphian Society, which promoted the education of women.

She served the county as a member of the board of the Mothers' Assistance Fund, and from 1924 to 1927 she was on the State Welfare Commission. Her appointment would have overlapped that of Isabella Fairfax, the subject of November's Williamsport Women column.

She was a member of the Clio Club and the Business and Professional Women's Club. A founder, along with Henrietta Baldys Lyon, of the Civic Club, she also was a founding member of the Woman's Club of Williamsport in 1924 and of the Republican Women's Organization. Another first was her election as the first female vice-president of the Republican County Committee. 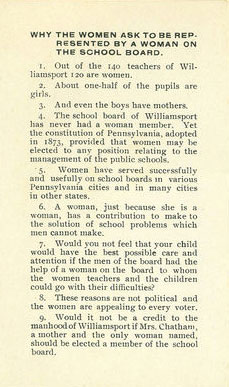 When Louise was in her 40s, she began studying for the Pennsylvania preliminary examinations. After qualifying to enter law school by successfully passing these examinations, held in Philadelphia, she enrolled in Boston University Law School. The unique story of an "older woman" in law school made headlines not only in Williamsport and Boston, but also across the nation. The March 20, 1920 Boston Herald headlined its story "Mother of Two to Study Law; Mrs. Chatham now able to realize ambition of early years."

At the time Louise began law school, her son Clyde was in his fourth year of a five-year course in engineering at the Massachusetts Institute of Technology in nearby Cambridge. Her son Newton enrolled in high school in Boston.

In the early 1900s, the Chathams started developing land they owned along Lycoming Creek, in an area they called Chatham Maples. In addition to building a beautiful home for themselves, they sold lots and built houses for others. In the 1920s, they moved full-time from 326 Centre St. to their new home, later called Jo-Jane Lodge. The house still stands and the Chatham Park apartments are nearby.

Louise attributed her success in life to persistence and the determination to do her best in all work that she undertook. She also credited her husband's interest in and support of her professional career, as well as her musical and club work.

Newton died in 1933. Louise died five years later, at her home. Her funeral was held at Covenant Central Presbyterian Church, where she had been president of the Women's Auxiliary. She and her husband are buried in Wildwood Cemetery.

Sieminski is a retired librarian and manager of the Lycoming County Women's History Collection. Her column is published the second Sunday of each month and she can be reached at lcwhcmanager@gmail.com. Copyright 2016 Williamsport Sun-Gazette. All rights reserved. This material may not be published, broadcast, rewritten or redistributed. Note: This article was reprinted with permission of the Williamsport Sun-Gazette.