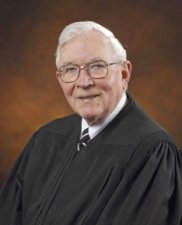 IN RE: APPOINTMENT OF A COMMITTEE TO DRAFT RESOLUTIONS IN THE DEATH OF CLINTON W. SMITH

On the 24th day of January, 2017, the Honorable Nancy L. Butts, President Judge of the 29th Judicial District of the Commonwealth of Pennsylvania, appointed the undersigned Committee to draft Resolutions memorializing the life of Judge Clinton W. Smith, and to submit the same to the Court on Friday, April 7, 2017 at 3:30 p.m.

The undersigned Committee submits the following Resolutions for the Court’s consideration:

NOW THEREFORE, BE IT RESOLVED that we, the undersigned, joined in by the Lycoming County Bar, do hereby recognize and mourn the passing of the Honorable Clinton W. Smith, and remember him as an exemplary member of the judiciary, a man of high professional confidence, a friend, a mentor and a servant of the community, and honor his contributions to this community; and be it RESOLVED FURTHER, that these resolutions and statements be spread at length upon the minutes of the court with copies to the Judge’s family and descendants, and be published in the Lycoming Reporter; and, be it RESOLVED FINALLY that this court and the Lycoming County Bar extend to Judge Clinton W. Smith’s surviving wife, child, grandchildren and step-grandchildren, as well as his brother and other family members, our deep and heartfelt expression of sympathy and respect for Clinton W. Smith.

AND NOW, this 7th day of April, 2017, in consideration of the resolutions presented by the Committee appointed to draft Resolutions in the death of the Honorable Clinton W. Smith, said Resolutions are adopted and it is hereby ORDERED AND DECREED that the Resolutions herewith submitted and attached be adopted as an official expression of the Lycoming County Bar and this Court; and that the same be spread upon the records of the Court; and that copies of this Resolution be delivered to Judge Smith’s wife, son and stepchildren; and it is further ORDERED and DIRECTED that said Resolutions be entered at large and upon the record of the Court, and that they be printed in the Lycoming Reporter.