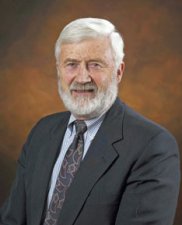 Thomas Charles Raup, a 50 year member of the Lycoming Law Association, and 22 year Judge of the Lycoming County Court of Common Pleas, died August, 2016. He was remembered at a memorial service held September 30, 2016.

IN RE: APPOINTMENT OF A COMMITTEE TO DRAFT RESOLUTIONS IN THE DEATH OF THOMAS C. RAUP

On the 15th day of September, 2016 the Honorable Nancy L. Butts, President Judge of the 29th Judicial District of the Commonwealth of Pennsylvania, appointed the undersigned Committee to draft Resolutions memorializing the life of Thomas C. Raup, and to submit the same to the Court on Friday, September 30, 2016, at 3:00 p.m., in courtroom number 1 of the Lycoming County Courthouse, Williamsport, Pennsylvania.

The undersigned Committee submits the following Resolutions for this Honorable Court's consideration:

NOW, THEREFORE, BE IT RESOLVED, that we, the undersigned, joined in by the Lycoming County Bar, do hereby recognize and mourn the passing of the Honorable Thomas C. Raup, and remember him as an exemplary community servant and good friend, a man of conscience, commitment and quiet strength, and honor his extensive and remarkable contributions to this community and beyond, a man who was loved, honored and respected by all who had the privilege to be a part of his life;

AND BE IT RESOLVED FURTHER,  that these Resolutions and statements be spread at length upon the Minutes of the court with copies to Judge Raup's family and descendants, and be published in the Lycoming Reporter; and,

AND BE IT RESOLVED FINALLY, that this Court and the Lycoming County Bar extend to Thomas C. Raup's surviving children and their spouses, his grandchildren, his brother, his nephew and other family members, the deep and heartfelt expression of sympathy and respect for Thomas C. Raup.

AND NOW, this 30th day of September, 2016, in consideration of the Resolutions presented by the Committee appointed to draft Resolutions in the death of the Honorable Thomas C. Raup, the said Resolutions are adopted and it is hereby ORDERED and DECREED that the Resolutions herewith submitted and attached be adopted as an official expression of the Lycoming County Bar Association and this Court; and that the same be spread upon the records of the Court; and that copies of this Resolution be delivered to the children of the Honorable Thomas C. Raup; and it is further ORDERED and DIRECTED that said Resolutions be entered at large and upon the record of the Court, and that they be printed in the Lycoming Reporter.