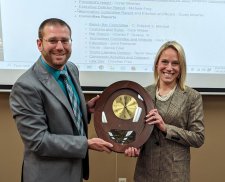 The 2023 annual meeting of the Lycoming Law Association took place on January 9, 2023, at the Association's office in the Penn Tower. The meeting was opened by President Corey Mowrey.

After approval of the minutes of the 2022 meeting, President Mowrey reported on the activities of the Association in the past year. His formal, written report appears below. He did express his appreciation to the Association's officers and Executive Director for facilitating a successful term of office.

Ryan Gardner reviewed the Association's financials. The budget deficit of the past several years has been reduced significantly, due mostly to increased revenue from the Lycoming Reporter and CLEs.The reports were approved.

The new president, Liz White presided. She recognized Executive Director Michele Frey, who gave her report. Michele reviewed the activities of the Association, as outlined in her written report, which is reproduced below. Committee reports followed.

The final act of the Association was to approve the recommended budget.

President Robin Read reported on the activities of the Foundation, which included three major grants in 2023. She also pointed out that the foundation expanded its board to nine members, and that the members worked well together in 2023.

The Nominating Committee recommended Paul Roman and Sean P. Gingerich for four year terms on the board, and the report of the Committee was approved without dissent. President White and President Elect McCoy will serve as ex-officio members of the Board in 2023.

The agenda and reports of the officers and committees are available at the links below.