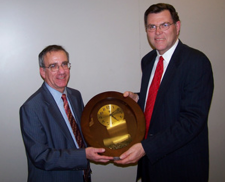 The 2005 annual meeting of the Lycoming Law Association took place in the jury assembly room at the Lycoming County Court House on January 11, 2005. At the meeting, the members elected officers, heard reports and approved a budget.

The members approved a motion to transfer of $25,000 in surplus funds to the Lycoming Law Association Foundation; specifically to be transferred as follows: $15,000 to the endowment, and $10,000 to the newly created Community Activities Fund. Also approved was a motion to approve the donation of $5,000 to the Pennsylvania Bar Association in honor of its incoming President, our own William P. Carlucci.

Reports of the various committees were given verbally. Links to copies of all the reports follow.

The Lycoming Law Association Foundation meeting took place after the annual meeting adjourned The highlight was the approval of new by-laws.