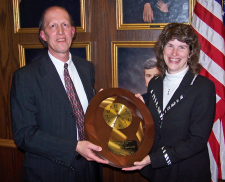 The annual meeting of the Lycoming Law Association took place at the Lycoming County Courthouse on Monday, January 14, 2008. The meeting was opened by outgoing president John Pietrovito. Minutes of the 2007 meeting were approved.

The financial reports were discussed by Joy McCoy, outgoing treasurer and Bill Knecht, Lycoming Reporter Editor.  The Association's finances are in good condition, and the Reporter showed a substantial profit for 2007, even after a substantial contribution to the LLA Foundation and a donation made in honor of murdered Attorney David Keeffe and his wife.  The financial reports are linked below..

President Pietrovito reported on his term of office, and also referred to his comprehensive report, which is posted. He mentioned, among others,  the upcoming move to new office facilities, significant CLE offerings by the LLA, increased committee activity, and revised by-laws as significant activities during his administration. He expressed appreciation to the Association's Executive Director, Jessica Engel,  for her good work.

Two issues of old business were discussed by the members.  Last year a motion passed to allocate $5000 to the be spent at the discretion of the Executive Committee for the reward fund and as a memorial contribution, on behalf of murdered Bradford County Attorney David Keeffe and his wife Carol. The Executive Committee decided to make a contribution of $2,500.00 to the Keeffes' favorite charity, the local UNICO chapter, and to pledge the sum of $2,500.00 to the reward fund established by the Bradford County Bar Association.

The second issue related to ethical complaints approved by the membership to be filed against out-of-town attorneys advertising in the local telephone books.  Some of the advertisements failed to designate the main location of the practice.  Four complaints were filed. The LLA received notification from the Disciplinary Board that two of the law firms have agreed to change their advertisements published in the yellow pages of the telephone books to bring them in compliance with the Rules of Professional Conduct, and the complaints have been dismissed. The complaints against the remaining two law firms are still pending before the Disciplinary Board.

In new business, the report of the ad hoc committee to evaluate and revise the by-laws was reviewed.  The committee proposed amending the by-laws to allow meeting notices to be served by email, to recognize the position of Executive director and to establish its responsibilities, and to reorganize the committee structure.  The revisions to the by-laws were approved unanimously.

The meeting of the Lycoming Law Association Foundation followed.  The meeting was conducted by President William Nichols.  Minutes of the 2007 meeting were approved.  President Nichols recognized the long-time service of outgoing Foundation board member Joseph Campagna.  John Humphrey was elected as his successor on the board.