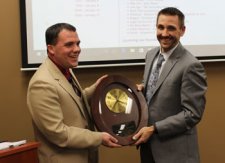 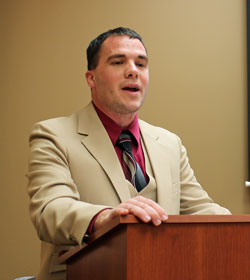 The 2017 Annual Meeting of the Lycoming Law Association took place on January 9, in the LLA office and conference facility.  Bob Cronin concluded his term as President. Ryan Tira of McNerney Page was elected as the new President. The traditional passing of the "President's Clock" ceremony marked the change of administrations.

The members received and heard committee and officer reports. The reports  are written and are listed at the bottom of this article. The reports were all presented electronically, on the room's projection equipment.

President Cronin remembered the members lost in the past year with a moment of silence: T. Max Hall, Judge Thomas Raup and Judge Clinton Smith. 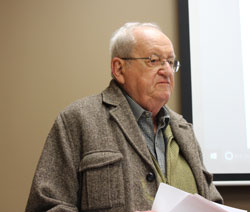 Other business completed by the membership was the election of the officers of the Association, including President Tira. Bob Cronin will now serve in the position of Past-President. Jennifer L. Heverly will serve as President Elect.  Magistrate Judge Christian Frey will repeat as Treasurer and Angela Lovecchio will serve as Secretary. Don Martino, Corey Mowrey and Yvonne Campbell will continue to serve as Executive Committee members at large. Newly selected to the Executive Committee was Elizabeth White of Marshall, Parker and Weber.

Following the LLA meeting, the meeting of the LLA Foundation took place. President of the Foundation, William Nichols presided for the last time. He is completing his last term on the Board, having served since the Board's inception. Bill was recognized for his service with a round of applause.