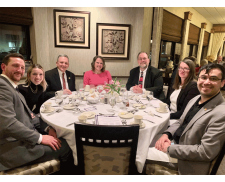 For the first time since 2020, the Lycoming Law Association celebrated its annual banquet, at the Le Jeune Chef Restaurant at Penn College. Members and guests socialized together, ate well, and shared in the recognition of some of its members.

President Liz White kicked off the event by recognizing the service of the immediate predecessor, Corey Mowrey. He received a gift of a bottle of fine liquor, with the thanks of the members.

Pro bono awards followed, with Jen Heverly and John Pietrovito noting the members and firms who offered pro bono work in the past year. The Thomas Wood Equal Access to the Law awards for 2021 and 2022 were awarded to John Person and Corey Mowrey, respectively.

The final award went to Magistrate Judge William Arbuckle, who was presented with the William Nichols Public Service Award.

Enjoy some photos of the event, below.