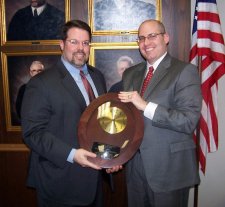 Association President Brian J. Bluth summarized the year's activities.  He highlighted the first-ever visit of the Commonwealth Court to Williamsport in September of 2011, capped by the Court’s first-ever session at the Lycoming County Courthouse. The three-judge panel was chaired by Lycoming County’s native son Judge P. Kevin Brobson (Montoursville). The Association began its year with a tribute to the Honorable Malcolm Muir at its 2011 Annual Dinner and Bluth noted that the Association said a “final farewell to our mentor and friend Malcolm Muir” at a special ceremony of Court in August of 2011. When Judge Muir died on July 22, 2011, at the age of 96, and had been the longest-tenured member of in the Association’s history. Bluth also highlighted the $6,500.00 raised by the Association and its members and donated to the local Red Cross chapter to support flood relief efforts. Finally, through the efforts of Gary L. Weber, Editor of the Lycoming Reporter and the Association’s webmaster, a newly revised webpage (www.lycolaw.org) was launched in 2011 with more user-friendly features.

The membership accepted written reports from the Association's Committees (see links to the reports, below).  Some Committee chairs offered brief summaries of their reports.

Treasurer Julie Steinbacher reported that the Association is in good financial condition.  Although income was down for the year, the investments did well.  The 2012 budget of slightly more than $173,000 was approved.

Following the election of officers and members of the Association’s Executive Committee for 2012, the meeting was concluded by the new Association President, J. Michael Wiley. Also elected to leadership positions of the Association for 2012 were: Julieanne E. Steinbacher, President-Elect; Patricia Bowman, Treasurer; Thomas Waffenschmidt, Secretary. Robert Cronin, Tammy A. Weber, Ryan M. Tira, and Jennifer Heverly were elected as members to the Executive Committee for 2012.

Appreciation was expressed to Michael H. Collins, Past President and Joseph R. Musto for their service to the organization as each of their respective terms on the Executive Committee came to an end.

William E. Nichols, President of the Lycoming Law Association Foundation presided over its annual meeting. Jack Humphrey was thanked for his dedicated service to the Foundation as he retired from his position as trustee.  Brian J. Bluth was elected to his first term as trustee of the Foundation.

Mr. Nichols reported that the Foundation made no grants in 2011.  There was a difference of opinion among it's trustees as to the authority of the Foundation to make grants to causes that would have a positive impact on the community, and cast the Association in a favorable light, but which may not be entirely law related.

With that, the meeting was adjourned to the annual banquet.