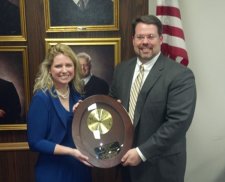 When all is going well, meetings are short.  The length of this year's annual meeting is a good sign of the health of the Lycoming Law Association, as business was concluded in less than 30 minutes.

Of course, all of the committee and officer reports have been committed to writing and are available at the links at the bottom of this page.  The past practice of reciting the reports is no longer necessary.

Among the business that was completed by the membership was the election of the officers of the Association.  Julie Steinbacher was elected President, replacing Mike Wiley, who now will serve in the position of Past-President. Tom Waffenschmidt was named President Elect.  The remainder of the Executive Committee was retained:  Patricia Bowman, Treasurer; Robert Cronin, Secretary; Tammy Avery Weber, Ryan M. Tira, and Jennifer L Heverly, Executive Committee members at large. Newly selected to the Executive Committee is Christian Frey.

Following the LLA meeting, the meeting of the LLA Foundation took place. Bill Nichols was elected to another 4 years as trustee of the Foundation.  The annual report of the Foundation and its financial reports were also received and approved.