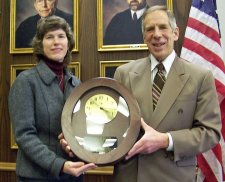 The Lycoming Law Association's  annual meeting took place without a hitch on January 12, 2009.   At the meeting, the membership elected officers, received committee reports and financial information and approved the 2009 budget.

After presiding over the Association for a year, President Tammy Taylor exited gracefully, after providing an extensive report of her activities during the year.  She passed the President's clock to newly elected President Jonathan Butterfield.

Attorney Butterfield presided efficiently over one of the shortest meetings in recent history.  Committee reports were accepted as a group with comment on individual reports invited.  Most committee chairs agreed to submit their reports in writing only.  All reports are posted and available to the membership for review. See the reports, linked below.

Financially, the LLA and the Lycoming Reporter did well in 2009 with an increase in assets of over $15,000.  Despite the poor economy, a good year is projected for 2009, as well.

The meeting was adjourned after about 25 minutes.

Nichols was reelected to a 4 year term on the Board.

The Foundation reported a fairly minimal loss of assets in 2008.  This was based on the relatively conservative nature of its investments.